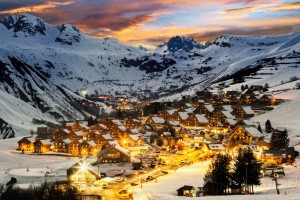 The French Alps are expected to be very busy as the New Year begins, so could you set your sights on the mountain property market?

Current market conditions are making it a perfect time to be a foreign buyer of a ski home in France.

Wealthy French residents are selling up and leaving the country due to President Hollande’s severe tax regime. Thus, more and more properties are being put up for sale, including in French ski resorts.

Additionally, second homeowners will be aware of the French government’s reduction in its rate of Capital Gains Tax (CGT), applicable between September 2013 and September 2014. These two factors are making France a preferable location for buyers.

Equally, French euro mortgages are extremely cheap at present, due to mortgage rates sitting close to historic lows. Buying a property with a euro mortgage on a competitive rate could be the best decision for foreign buyers.

Meanwhile, the world will soon be looking to winter sports when the Winter Olympics grace our television screens in February 2014. But it’s not just the Russians who will be inspired by the event; it is expected that many people’s interest in owning a ski home will be sparked.

Julian Walker, the Director at Skiingproperty.com, says: “The Winter Olympics never fails to inspire people to hit the slopes. Having the event in Sochi is especially exciting for Russians, the host nation, though, as the wealthier ones already have an affinity to selected Alpine resorts, such as Courchevel.

“Overall, foreign buyers, including Middle Easterners, are realising that France’s severe taxation of its rich residents won’t affect them as non-resident owners of ski homes, so they are taking advantage of the opportunities to purchase a euro asset that comes with strong lifestyle appeal and long-term investment potential.”

Courchevel’s boutiques and hotels, alongside its seven Michelin-starred restaurants, attract wealthy skiers from around the world. Add in the fact that the resort’s three-kilometre Combe de la Saulire red run is included in the world’s top ten ski runs, and the resort is a winner.

Walker adds: “Another sign that Courchevel welcomes visitors with a very high level of disposable income is its aerodrome, which serves as an exclusive and private way of arriving and leaving the resort!”

Could you be headed to Courchevel for a holiday next year? And could you possibly find a property while you’re out there?