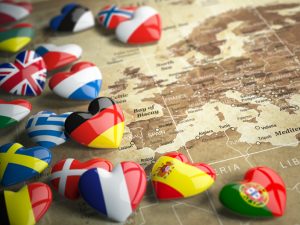 As this week finally saw the start of formal Brexit negotiations between the UK and the European Union, interesting new research has suggested Brits are still interested in buying property in key European cities.

Indeed, Brexit is seemingly not deterring those who wish to purchase in countries such as France, Spain and Italy – locations notoriously popular with UK buyers.

A survey from legal firm Spanish Legal Reclaims reveals that 55% of would-be buyers abroad said that Brexit will have no impact on their decision to purchase. In fact, 10% of those asked said that they were actually more likely to purchase in Europe following Britain’s decision to leave the EU.

Spain remains the most popular country with British buyers, with 45% stating this was their preferred location. 37% favoured France, while 20% put Italy top of the list.

Chief Executive of Spanish Legal Reclaims, Luis Cuervo, said: ‘It’s not surprising to hear that Spain remains the favourite destination for British people who want to buy property in Europe. It continues to deliver on lifestyle, property prices and climate.’[1]

In addition, the firm has found that it is possible for UK buyers who were affected by disappearing developers to get their money back. This comes after a Spanish Supreme Court ruling in December 2015 that states those who brought a property off-plan that wasn’t delivered on time by a developer since gone bankrupt can make a claim.

This ruling means that buyers in this position can reclaim their money back from the bank that was supposed to safeguard their deposit. Cuervo pointed out that this could impact on UK buyers hundreds of thousands of pounds out of pocket.

Cuervo esitmates that 130,000 UK buyers are eligible to claim a total of up to £5.3bn and his firm is assisting clients to reclaim monies that they are owed.