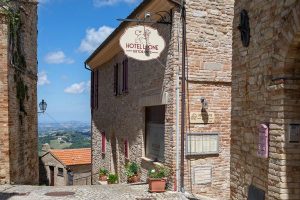 For those feeling inspired to live the life of an expat, or even those looking to be inspired, you will love this story that we’ve come across, about a couple who decided to go for it, and make their dreams a reality in Italy…

British couple Tim and Madeline Jones were very much a part of the rat-race, working in international finance, yet harbouring a secret desire to give it all up, and escape abroad.

It was a dramatic change from their high-pressure, corporate lifestyle, but when they made the decision to start a renovation project to open a boutique hotel, in the medieval village of Montelparo, their dream eventually became a reality.

Madeline has shared details on how this spark of interest became fuelled into a life-changing passion: “We spent our honeymoon in Italy enjoying a taste of La Dolca Vita and both felt an instant affinity to this land of good food, fine wine and abundant natural beauty.

“Our interest in Italy never really went away, and over time the idea became a yearning and our dream became a possibility. We are both practical and methodical, so we made a strategic long-term plan to find a property that could also bring in a healthy on-going revenue.

“I’ve always been driven and not at all scared of getting my hands dirty, working my way up the career ladder. I worked in investment banking for over 25 years, latterly in Singapore as Regional Head of Asia for a German bank. Starting as a ‘temp’ answering the switchboard before studying in the evenings to become a qualified Accountant.

“During my banking career I travelled extensively staying in some top hotels which gave me the inspiration for certain aspects of the hotel design and management.”

However, we all know that dreams such as this do not necessarily become a reality overnight. It took Madeline and Tim almost five years to find the right property. After viewing 100s of projects around Italy, they finally found what they wanted in the region of Le Marche: the Hotel Leone. 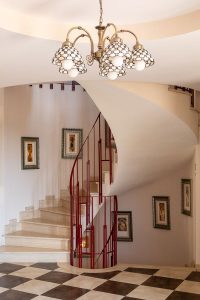 The couple were happy with the location and the character of the property. It also had space for a restaurant, pool and dining terraces.

The documents for the property show that its original heritage dates to 1501, referring to it as the Palazzo Pellei, which was then the name of a noble and powerful Italian family!

In more recent years, up until the 1980s, it was known as the Taverna del Leone, but was abandoned by its owners in 1986. Since that moment, it sat untouched, until Madeline and Tim came along; from furniture, to the cutlery placed on tables, all was undisturbed…

Certain items were found wrapped in cling film, in order to preserve them, and some have since been restored by a local artisan, to be used again. So romantic, don’t you think?

There was plenty to be renovated, and it took a lot of hard work to modernise the hotel. There was even the exciting discovery of a wine cellar, hidden behind a wall that had been blocked up.

Madeline explained: “After Tim and I studied some old plans of the building we quickly realised it was a false wall and opened it up to see what was behind. After excavating hundreds of years’ worth of silt and mud, a cosy wine cellar was created. The cellar is, in fact, a blocked off tunnel which would have been an underground route beneath the town.

“Montelparo is a fortified town and as with many of these historic locations it has its own network of hidden passageways beneath the buildings allowing residents to move secretly from one side of the town to the other.”

What we love most about their story, is that it shows how taking on a big project is not likely to be straightforward and simple, but it’s how you deal with the problems thrown in your path that allow you to keep going. In their case, they used such problems to their advantage, especially when an unexpected three-year banking contract detoured Madeline to Singapore…

Madeline said: “Tim and I decided to use this time to retrain and consolidate our business plan for Hotel Leone.  We don’t do things by half, so we both started studying Italian and Tim retrained as a gourmet chef the Sunrice Global Chef Academy in Singapore, gaining valuable experience working alongside international chefs including 3 starred Michelin Chef Christian Bau.

“The time in Singapore allowed us to pull everything together and, as soon as soon as we were ready, we packed our lives into cargo containers and had everything shipped to Italy.”

This big project was fortunately made easier, by the fact that Tim had hands-on experience of property development in the UK. He made sure that everything was finished to a very high standard, sourcing local materials and overseeing a team of artisans, when needed. They made an effort to also save original architectural features, where possible. 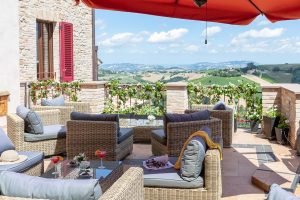 Tim has also explained his thought process, when it came to the design: “I fell in love with an old Odeon Cinema in the UK, with its the angular lines and opulent finishes.

“We drew up our own designs for the bar which included an iconic geometric motif which also features throughout the hotel. For example, it can be found in the 3-dimensional travertine skirting around the spiral staircase which runs from top to bottom of the hotel. The spiral theme was extended into the ‘Empire’ bar where we created a multi-level curved ceiling installation.”

The majority of the work was undertaken personally by Tim and Madeline, including tiling, decorating and fitting. Local builders were used for work on the structure of the building. The couple chose to use environmentally friendly techniques and materials, wherever possible, and the Hotel Leone is set up to utilise solar power energy. It even has its own rainwater collection system, for watering the plants on the terrace!

“Some would say we are crazy to have taken such an active role in every minute detail of the hotel’s life, but our 24/7 involvement has made Hotel Leone what it is today. Tim and I put our energy and passion into every element of Hotel Leone’s life and we hope that guests experience the knock-on effect of our love for the hotel and feel truly well looked after when they stay with us.”

We hope you feel as inspired as we do, to consider taking on such a life-changing project. It will be hard work, and things won’t always go according to your original plan, but with perseverance and the open-mindedness to adapt efficiently, you could make that dream expat life a reality!

This entry was posted in Overseas Property and tagged Italy, renovation project. Bookmark the permalink.