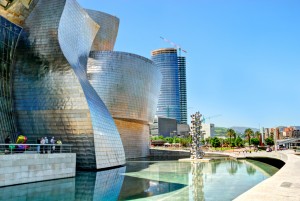 World-famous starchitect Frank Gehry picked some choice words when Spanish journalists brought up criticism of his work when he was in the country to accept a prestigious award.

The 85-year-old, supposedly jet-lagged, was asked whether his buildings are “just a spectacle” or whether emblematic buildings like his have run their course.

At a press conference in Oviedo, Spain, celebrating Gehry winning the Prince of Asturias prize, presented by the Spanish King Felipe, the Canadian architect raised a middle finger in response to the first question.

He replied to the second with: “Let me tell you one thing. In this world we are living in, 98% of everything that is built and designed today is pure s**t. There’s no sense of design, no respect for humanity or for anything else. They are damn buildings and that’s it.”

He continued: “Once in a while, however, a group of people do something special. Very few, but god, leave us alone. We are dedicated to our work. I don’t ask for work… I work with clients who respect the art of architecture. Therefore, please don’t ask questions as stupid as that one.”

Gehry is famous across northern Spain for the Guggenheim Museum in Bilbao. He is known as the most important architect of his time, with modern designs that often become tourist attractions.

Despite specialising in public buildings, one of his residential projects is the latest released phase of the Battersea Power Station development in London.

At the press conference, he added: “Bilbao shows that good architecture can make a difference.”1

He later apologised for his rudeness.

This entry was posted in Overseas Property and tagged architect, architecture, Spain. Bookmark the permalink.