Setting Up a Business in Your New Home Country
Tweet 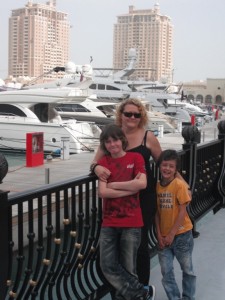 Julie Pickering and her sons

You may be planning on starting a business overseas, or maybe it happens to you by accident, similarly to Julie Pickering. However you become an overseas business owner, this story could inspire you and give you a few tips…

Julie has been living in Albufeira, in the southern Algarve region of Portugal, for almost ten years. The 45-year-old mother of two boys moved to the area that her parents already had a house. She had visited with her then husband and fell in love with the country.

“It just took two years for us to make the final decision,” she says. “We sold up in the UK and left with our caravan, the boys and the dog.”

When they first arrived, they lived in the caravan at the bottom of Julie’s parents’ garden.

She explains: “We then found a bit of land with a ruin and formed the aim of building our dream house! Seven years later (living in the caravan for that time) we finished and moved into our house.

“The boys attend Portuguese schools and are fluent in Portuguese. My eldest, Lewis, started at the Jardim de Infancia the September after we arrived. We left him there each day in tears as he screamed down the road because he didn’t speak the language and didn’t want to stay!”

But things can quickly turn around; “three months later he was fluent in Portuguese and very settled”.

Of her other son, Julie says: “My youngest, Nicky, started gymnastics with a local club at the age of five. He has now been to Switzerland to represent Portugal and has been Portuguese National Champion two years running. Next year he goes to Romania and Italy to represent Portugal.”

But things didn’t always run so smoothly. Julie and her husband have now separated, as “he found it difficult to find work in his line here in Portugal”.

So how did Julie come to own a pet shop in Portugal?

“We started the business by accident!” she explains. “We were in talks with a dog food producer in the UK regarding getting hypoallergenic foods for our pets out here, and they said, ‘Why don’t you order a pallet and try and sell it there?’

“We did just that, and the year after we arrived, we launched Paws 4 Pets at the Better Living in Portugal exhibition. Our of that came a demand for all things pet-related and that is how Paws 4 Pets was born!”

So what has Julie found the biggest barrier to life in Portugal? “The language was the main problem and still presents a few problems because I am nowhere near fluent,” she states. “Also the bureaucracy of everything – matriculating cars, starting a business, building a house – it’s all difficult in a foreign country and a foreign language.”

If you’re considering a move to Portugal, take note that the one thing Julie would change about the country is “the amount of paperwork involved in achieving anything”.

Could you be taking on a venture similar to Julie’s in the near future? Remember to ensure you have anything in place before you’re hit with a bulk of paperwork!

This entry was posted in Expats and tagged Expat, Portugal, Portuguese property, starting a business. Bookmark the permalink.