Say Ciao to Italy, the Destination Many are Moving too!
Tweet 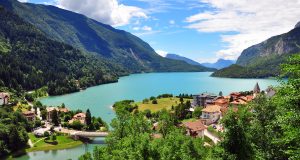 Italy has long been a popular destination for those looking for a break away from life in the UK. Whether it’s for a weekend stopover, a couple of weeks in the sun, or something a bit more permanent – Italy has something for everyone! The rich history to be uncovered in every city, the local delicacies of both food and drink, and the beautiful beaches will keep you entertained for a lifetime…

So, it comes as no surprise that Gate-away.com, the leading Italian property portal, has reported an increase in the trend for homes sought by those looking to move overseas.

In fact, the company has recorded almost a 50% increase in enquiries for homes for sale during January to February this year, in comparison to the same period in 2017.

Recent upheaval in regards to the Italian government seems to have deterred some from following their dreams, as interest slowed to +5.38% over the period of March, April and May. However, with matters beginning to settle down, overseas home hunters are yet again turning to Italy.

Simone Rossi, general manager of Gate­-away.com, has said: “The figures speak for themselves. It is evident that the formation of a government after a long struggle has reassured international investors. The stakes in the last elections were very high and created a lot of uncertainty in possible home buyers, for whom investing in a second home in an Italy with an unclear future would have been risky”.

Of all those showing an interest in relocating to the country, Brits appear to be in the top three, making up just under 14% of the total. Those looking from Germany are a close second on the list, at just over 14%, and those looking to move from America are top, making up 17% of international house hunters in Italy.

It seems apparent that holidaymakers are coming into the country for a change of scenery, but then can’t bring themselves to leave! Are you one of the many who have fallen in love with the ‘bel paese?’

At the very least, this must be great for Italian tourism statistics, as many potential international buyers find themselves visiting on multiple occasions simply for property viewings. In a survey conducted by Gateaway.com, involving around 40 thousand house hunters from around the world, almost half responded that during 2017 they had visited Italy two or more times. Just over 30% of them stated it was for a holiday and to search for their dream home.

Interested in the current most popular areas? Simone Rossi has commented: “There is no longer one single region or area preferred by non­-Italian buyers. Investors are now looking for ‘new’ undiscovered areas in Italy in which to experience a less touristy and more authentic Italian lifestyle. If we look at the most requested destinations, at the top of the ranking we find the Salento area.” He goes on to say that lakeside areas, such as Lake Como, Lake Iseo and Lake Maggiore are increasingly attracting the attention of those looking to relocate.

He concludes: “Lake Como is closely followed (in popularity) by Lunigiana. This magnificent territory straddling Tuscany and Liguria is still little touched by mass tourism and offers properties at very affordable prices as well as Maremma in southern Tuscany. It is precisely for this reason that they are attracting more and more attention from international buyers to the detriment of other more famous areas such as Chianti that we now find in seventh place in the ranking.

Are you tempted to invest in your own little slice of Italian paradise? Perhaps you already have! If so, we’d love to see pictures, so feel free to tag us on Instagram (InstaMyVilla)!

This entry was posted in Expats and tagged Italy, Moving Abroad, Relocation. Bookmark the permalink.