Happy Easter to all of our followers! We hope that those of you who took part in Lent this year were successful.

Easter is another one of those holidays that is celebrated in different ways, depending on your faith and culture.

We love learning about the differences between how people in the UK celebrate a holiday (which even often vary from region to region) and those overseas. Easter is no exception!

We’re sure that we’ve barely touched the surface with this one, but we’ve rounded up some of the traditions that take place across Europe at this time of year: 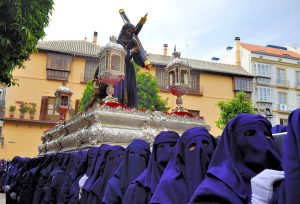 Processions – If you visit during Easter, you will be able to witness the processions that pass through the streets of Malaga.

These take place between Palm Sunday and Easter Sunday. The processions are made up of giant thrones (tronos), covered in beautiful flowers. There are two thrones on a procession – each carrying a Christ and Virgin figure.

These displays are carried around on the shoulders of throne bearers, with some of the heaviest requiring as many as 250 people.

Food – Malaga’s Easter treat is the torrijas, a sweet bread dipped in milk and egg, then fried and coated in sugar or honey. Delicious!

Another tasty treat found throughout Easter are Pestiños, little sesame-flavoured pastries, which also come glazed with sugar or honey.

Traditions – As we’re sure you are unsurprised to hear, Easter is also a big event in Italy.

In particular, the people of Florence have an exciting tradition called the Scoppio del Carro – the Explosion of the Cart. This involves decorating a wagon, which is then pulled by white oxen adorned with flowers. The wagon is drawn from the Church of the Santissimi Apostoli to Florence Cathedral, full of firecrackers.

At midday, a rocket in the form of a dove grasping an olive branch (the colombina) is launched at the wagon, leaving a trail of smoke. There is an explosion of fireworks, to finish the display.

The same wagon has been used since the 18th century!

Food – Lamb and eggs are the main features of an Easter feast in Florence. The eggs are present as a symbol of life, renewal and fertility; the lamb is a representation of new birth and the Good Shepherd.

For those who have a sweeter tooth, there is the colomba pasquale – a cake much like a panettone, shaped like a dove. It’s often made with candied orange peel and topped with sugared almonds. 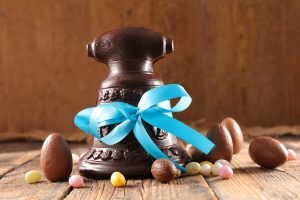 Traditions – We’ve saved the best until last, here! We’re always particularly interested in the weird and wonderful, and this one ticks both boxes. In the southwest of France, the locals get together to add more than 4,500 eggs into a giant pan, in order to make one massive omelette.

Each family cracks their own eggs, which are then cooked in the pan in the main square. Once ready, it is divided up and shared amongst them all.

This tradition is a more modern one, having derived from the time that Napoleon Bonaparte stayed in the area. He was served an omelette for his dinner, which he enjoyed so much that he had a giant one made up the following day to feed his regiment.

Food – Easter egg hunts (la chasse aux oeufs) are also popular in France. The children will get ready, and as soon as someone shouts les cloches sont passées, the hunt begins!

Les cloches sont passes translates as ‘the bells have passed’. Traditionally in France, it is a set of winged bells that bring chocolate at Easter, rather than a bunny.

The bells of Catholic churches are rang each day to invite people in for Mass, except at Easter. They aren’t rung between Good Friday and Easter Sunday, in order to commemorate the death and resurrection of Jesus Christ. The tradition goes that between these dates the bells grow wings and fly to Rome, to be blessed by the Pope. Over these couple of days, the bells will drop edible treats for the children, as they pass over. The bells then arrive back for the opening of la chasse aux oeufs.

This entry was posted in Travel and tagged Easter, France, Italy, Spain. Bookmark the permalink.