Look to Lisbon for a Lucrative Property Investment in 2018
Tweet 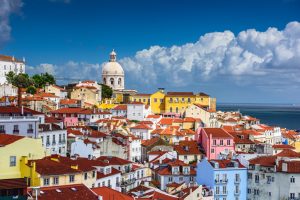 Affordable mortgages, great value for money and new flight connections with the UK make Lisbon one of the most appealing European capital cities for a lucrative property investment in 2018, according to InternationalPropertyForSale.com.

Investors put off the UK market by cooling house prices and the likelihood of further interest rate hikes next year should instead consider the Portuguese capital, where conditions are more favourable, the firm believes.

Mortgage rates available to foreign buyers in Portugal remain less than 3% for variable deals, with Portuguese banks typically offering 65-70% loan-to-value (LTV) deals and terms of up to 20 years, depending on personal circumstances.

“Clever investors, who would usually be cash buyers, are taking advantage of these excellent mortgage deals to reduce their exposure to today’s poor pound-euro exchange rate,” says Julian Walker, the Director of InternationalPropertyForSale.com. “When your funds are in sterling, getting a euro mortgage to buy in Portugal that can be paid off in full or part, with negligible penalties, once the euro weakens could be a wise move.”

Combining a cheap mortgage with a savvy property purchase in an up-and-coming district of Lisbon could make sound financial sense. A new report by Portugal’s office for national statistics reveals an average house price across the municipality of Lisbon of €2,231 per square metre for the year to the end of June 2017, which follows a 15% increase on last year.

Looking closer, the central districts of Santo António, which includes Avenida da Liberdade, and Misericórdia, which includes Bairro Alto and Cais do Sodré, achieved the highest prices – namely €3,294 per square metre and €3,244 repsectively, following annual growth of 46% and 38%.

While this growth is significant, prices are still low when compared to prime real estate quarters of other major European capitals.

“Other fashionable Lisbon districts where prices are lower, although still higher than the city’s average, include Estrela, Belém, Alvalade and Avenidas Novas,” adds Walker. “Average prices there are around the €2,500 per square metre mark, so there could be room for healthy capital appreciation. Meanwhile, districts that are below the city average include Olivais, Santa Clara, Benfica and Campolide, which again could offer appreciation potential for the long-term.”

Are you considering an investment in Lisbon? If so, we can offer you our market-leading Overseas Property Insurance to protect it. Get quick quotes and cover for your place in the sun here.

Elsewhere, confidence in the UK market was highlighted by the deposit launch on 29th October of the first ever flight between London City and Lisbon. Operating twice daily on weekdays and once a day on weekends by TAP, the service complements the Portuguese national carrier’s existing Lisbon services from Heathrow and Gatwick.

Supporting its commitment to the UK market, TAP recorded a 20.3% annual increase in the number of passengers travelling between London and Lisbon in the first quarter of 2017.

This entry was posted in Overseas Property and tagged Lisbon, Portugal, Property Investment. Bookmark the permalink.