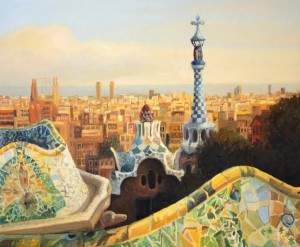 The amount of buyers purchasing high-end property investments in Barcelona, Spain has doubled over the first half of the year, reports a leading agent.

Confidence appears to be returning to the Spanish property market, with Barcelona and Madrid leading the way, according to Lucas Fox International Properties.

The number of wealthy clients buying investment property in Barcelona doubled from 30% in the first six months of 2014 to 60% in the same period of 2015.

Meanwhile, 60% of Lucas Fox clients who bought homes worth more than €900,000 in Madrid purchased for investment purposes.

A founding partner of Lucas Fox, Alexander Vaughan, comments: “This is a really exciting time for Spanish real estate. The tide is turning and people’s faith in the market is being renewed. Transaction numbers are up and prices, after falling up to 40%, have levelled out, and in some prime areas, are beginning to slowly rise again.”

For the first time, Lucas Fox’s research has included data from buyers of mid-range properties, worth between €400,000-€900,000. This shows that a third of all buyers in Barcelona purchased property for investment purposes, with the same amount buying a home as a primary residence. This highlights the growth in local buyers coming back to the market, a clear sign that recovery is underway.

In its survey on European attractiveness, accounting firm Ernest & Young placed Barcelona and Madrid in the top ten cities for investment in 2015, alongside London, Paris and Berlin.

The growing number of property buyers in Spain is thought to be one of the key drivers of economic growth in the country, which has already exceeded predictions.

Vaughan explains: “The recent correction in property prices in Barcelona and the rest of Spain has once again ignited interest in properties for investment purposes.

“The price adjustment combined with a growing economy and more favourable mortgage conditions all point to it being an opportunistic moment to invest in Spanish property, especially in prime locations. With a yield on rental properties of up to 5-6%, investing in Spanish property in some cases could be viewed as a safer bet than the stock market.”1

In the third quarter of this year, overseas buyers accounted for 13% of all property purchases in Spain – the same amount as over the whole of 2014.

Additionally, we revealed recently that British buyers purchased a fifth of all Spanish property sold to foreign buyers in the first half of the year. Read more: https://insuremyvilla.com/blog/2015/10/british-buyers-purchase-a-fifth-of-all-spanish-property-sold-to-overseas-investors/

If you are investing in the Spanish housing market, remember to protect yourself with overseas property insurance.