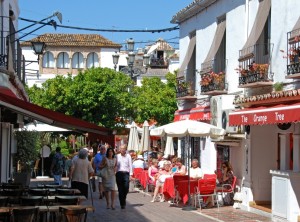 If you head to Benalmádena’s Bonanza Square in Spain’s Costa del Sol, you’ll find that most of the bars are exclusively filled with Britons, both expats and holidaymakers. But there’s an anxiety amongst them ahead of the EU referendum on 23rd June.

If Britain leaves the EU, the lives of British expats could vastly change. One million of the 5.5m Britons who have moved abroad to live in Spain can vote in the referendum. And many of them are keeping up with the British news to determine which way the vote will go.

Audrey is in her late 80s and has lived in Spain for 37 years. Lisa Richards, a 46-year-old Briton who works for a Spanish property firm laughs that Audrey doesn’t know a word of Spanish.

But Audrey is worried about her pension.

Looking at the front page of two of the three English-language newspapers in Spain reveals a report from the UK Cabinet Office, warning expats that they could lose “a range of specific rights to live, to work and to access pensions, healthcare and public services that are only guaranteed because of EU law.”

It adds: “UK citizens resident abroad, among them those who have retired to Spain, would not be able to assume that these rights will be guaranteed.”1

The NHS pays for healthcare that is currently free at the point of use in Spain, but as just a third of the British population there officially register themselves, Spain’s health ministry has long expressed that it is being ripped off by this deal.

Richards is worried about her job: “A lot of the property here is sold to Brits – they’re a big market. It’s easy to buy at the moment, and if the EU regulations no longer applied then it would definitely make the process of buying more complicated.

“I think if we come out of Europe, Brits won’t buy anymore. There will be extra taxes. I’ve lived here for seven years, and I have had to work really, really hard to get a good job. You start at eight and you work until eight, but a few years ago I tried to move back to Wales and I was told by the council I might as well get myself a cardboard box to live in and there was no work.”1

But Richards doesn’t plan to vote in the referendum, something that upsets Libby, a retired midwife from Lancashire, who splits her time 50-50 between Spain and the UK.

“I voted for the Common Market when I was 18. I’ll vote to stay in now. If we leave, we are not going to have any links anywhere anymore. We’ve no industry; we’re just a service industry,” she says.

Libby continues: “But the sad thing is that British people will just vote the way they are told to vote by the Sun or the Star or the Mail, because the majority won’t think for themselves or even bother to vote at all.

“Out here, a lot of people won’t bother to register to vote. What you find is that you talk about Brexit and everyone starts talking about migrants. The British are the only ones who don’t understand that the migrant thing is going to happen whether we’re in the EU or not.”1

If you’re wondering how to register as an overseas voter, this guide should help: https://insuremyvilla.com/blog/2015/02/how-to-register-as-an-overseas-voter/

Bar manager Richie Hart is worried about the economy.

“Our regulars are already suffering, because as soon as talk of the referendum started, the euro rates went down, so people getting their money from Britain get less,” he explains.

“This is no dream life out here: we work very hard and can’t afford to employ anyone – the costs of that are really high in Spain. Nor do the Spanish care if we succeed or not. If I have to hand the lease back, the government will get a cut from the lease being sold on again, so why would they care? If leaving the EU has a big effect on the bars then we’d have to get other jobs. We can’t go back: the employment situation in south Wales, where I’m from, is nine out of ten men out of work.”1

Nine EU nations are home to 20,000 or more British expats. But among the millions of Britons living abroad, Spain is the most popular European country, followed by Ireland and France.

Whatever happens after the vote, it is crucial that your overseas property is protected with expat property insurance.

If you’re wondering how a Brexit would affect you, we have information for overseas property owners: https://insuremyvilla.com/blog/2016/02/how-will-a-brexit-affect-owners-of-european-properties/