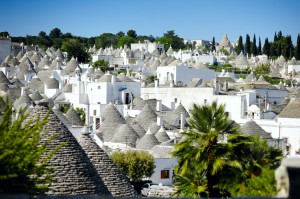 Puglia, the heel of Italy’s boot, was traditionally a warm yet quiet and unsophisticated part of the country. Now, the international market is appreciating its baroque hill towns, white beaches and ample olive groves.

In the past ten years, Puglia has climbed the ranks to desirable destination. This year, interest from foreign buyers overtook Tuscany for the first time ever, attracting 40% of all inquiries in Italy at Jackson-Stops and Staff.

Puglia is now “a trophy destination, like Capri or Portofino”, according to interior architect Nigel Wilson, who moved to the region to start a restoration business 11 years ago.

While international buyers haven’t deserted Tuscany – the area still attracts 30% of all enquiries in Italy at Jackson-Stops and Staff – many British visitors believe the area has lost its touch.

“Tuscany is too polished now,” believes Wilson. “Whereas Puglia still has that authentic feel. When I moved here, you couldn’t even get a Diet Coke.”1

Interest in Puglia arrives at a time of uncertainty in the Italian property market. Since the 2008 financial crash, prices have fallen by 20-30%. However, it is believed that the stagnant market is beginning to pick up again.

So far this year, inquiries and transactions have risen by 50% on last year, which recorded growth of 50% on the year before, mainly fuelled by British buyers, says property agent Casa Puglia.

While Puglia did suffer during the crisis, prices before the crash were very inflated on some properties, driven by the onset of foreign interest, states Casa Puglia’s John Zetterberg. He expects to see a 35-40% increase between 2010-2020.

Puglia also has a wealth of history on offer, with centuries of invasions by the Greeks, Romans, Byzantines, Normans and Spaniards leaving the region with a host of architectural charms. Trulli – conical-roofed cottages – and masserias – fortified farmhouses – are dotted throughout the countryside.

Many British buyers head to the triangle between Brindisi (where there is an international airport), Martina Franca (a baroque hilltop settlement) and Monopoli. This area also includes the hill towns of Ostuni and Alberobello, which is famous for its trulli.

Alanna McLeod, of the Elite Puglia agency, covering Ostuni, says: “We have waiting lists of clients, and no stock to show them. As soon as we list a property, it just slides out the door.”1

However, it seems Puglia’s success is limited to certain spots. Zetterberg observes: “Alberobello is a UNESCO heritage site, where every tourist spends at least a day. There’s a strong market around there. But in many areas of Puglia, supply is still bigger than demand.”1

Interest in the top end of the market is also limited, according to Jackson-Stops and Staff. Many of the highest end properties, costing over €1.5m, are found at the end of Puglia, where the Adriatic and Ionian seas meet. The area around Santa Maria de Leuca, at the tip of the Salento peninsula, is popular with sailors. However, the south of Salento is a long drive from the nearest airport (1.5 hours from Brindisi) and many shops and restaurants shut down for the winter.

Buyers are instead looked to the historic towns that cater to the summer influx of tourists, but also offer a year-round social life. Aside from Lecce, the Salentine capital, Manduria, Oria and Nardò offer a great social scene throughout all the seasons of the year.

Are you considering a move to Italy’s heel? If so, remember to protect you new property purchase with overseas property insurance, whether you are an expat, holiday homeowner or overseas landlord.

This entry was posted in Overseas Property and tagged Italy, Puglia. Bookmark the permalink.