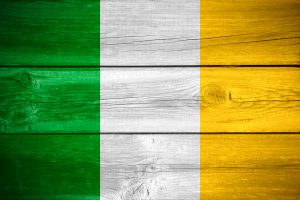 This is our final article in the series, so we would like to thank you all for reading. We hope you’ve enjoyed it all as much as we have, doing the researching and writing!

We’re coming to the end of Bake Off, and we’re sure you’ll agree that it’s been yet another fantastic season, full of talented bakers. With it also being the end of October, we specifically saved Republic of Ireland until last, as there are some special recipes that increase in popularity at this time of year. We chose the following fascinating dishes for this week’s list: 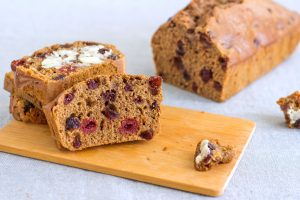 This is a traditional fruit loaf, and its name means ‘speckled bread’, so it’s quite a literal translation!

But, this is no ordinary fruit loaf. We chose this for our list because of the entertainment involved with sitting around the dining room table, serving up slices. Baked into the loaf are charms, which all carry a different meaning, if you get the slice containing one.

We’ve come across varying accounts of what the charms tend to be, along with their meanings, but these are the most common suggestions:

A ring – this means that you will marry within the year

A pea – you will not marry that year

A piece of cloth – you will become a nun

A silver coin – you will become rich

A stick – you will never marry/ have an unhappy marriage

We’re not sure that these are the most appetising additions to a cake, but it we love the idea behind it. Here’s a recipe from the Irish Times, if you want to give it a go.

This bread appears to be typical part of traditional Irish meals. Some have it as a sweet treat, with honey and dried fruits, or with treacle and Guinness. Combining it with seeds, bran and oats is a healthier option chosen by others. However it is served, it seems vital that there is a thick spread of butter on every slice.

This bread is named as such because the recipe calls for bicarbonate of soda to be used as the leavening agent.

It turns out that there are two main types of soda bread. There’s ‘cake’, which is mostly found in the south of Ireland, and ‘farl’, which you’d more typically see in the north. However, both are available all over.

Cake is distinguishable by its flat, round shape, along with a cross cut along the top. Farl differs mainly in shape and size. It comes in individual portions, and the shape itself is known as a ‘farl’, which is a term used for any triangular shaped baked good.

We found this recipe for soda bread on the website for Ashford Castle, the hotel and restaurant in the west of Ireland. 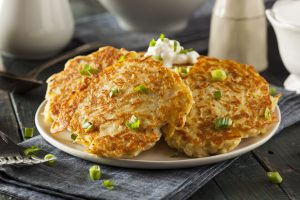 Boxty is an Irish potato cake. It’s made of a combination of raw grated potato and mashed potato, moulded into a patty shape.

Not only did we come across a recipe for boxty on the Irish Central website, we also found there a little rhyme about the savoury cake, which, we agree, is ‘woefully out-dated’:

Boxty on the griddle,

Boxty in the pan,

If you can’t make boxty,

You’ll never get your man. 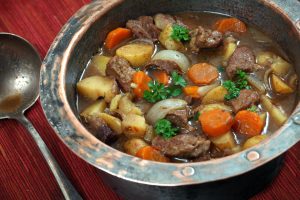 This is a classic that most of you have probably heard of. The recipe can vary from family to family, but, most commonly, you’ll find it is made with either lamb or mutton.

Mutton was always more commonly used in early recipes, as it was widely available, due to sheep farming, for wool and milk. Being notoriously tough, stewing the meat to soften it was the preferred cooking method.

The vegetables tend to be chunky carrots and roughly chopped onions, which go perfectly with the meaty stock.

With potatoes being a key ingredient in a lot of traditional Irish dishes, despite the Great Famine in the 19th century, it will come as no surprise that this stew contains a hearty helping, either chopped and mixed in, or sliced and baked on top.

We were particularly attracted to this mouth-watering recipe by Jamie Oliver.

And that’s it from us, for Baking Around Europe! We hope you’ve enjoyed the journey as much as we have. We wish the remaining Great British Bake Off contestants the best of luck, and can’t wait to see who emerges from the tent as this year’s champion!

This entry was posted in Travel and tagged Irish food, Republic of Ireland. Bookmark the permalink.