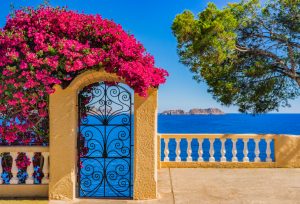 OK, so this one may not be for everyone, but it certainly caught our interest – actor Michael Douglas has owned an estate on the Spanish island of Majorca for the last 30 years, but has now decided to let it go.

Listed at $32.7 million, the S’Estaca estate is situated in an area that has seen its fair share of celebrities on holiday. From fellow actors Gwyneth Paltrow and Harrison Ford, to musicians Noel Gallagher and Sting, they have all been spotted around in recent years. Douglas has been known to host many of his Hollywood friends at S’Estaca, which sleeps up to 20 people.

The nearby Hotel Formentor has also seen the likes of Audrey Hepburn and Elizabeth Taylor, whilst on vacation, and Grace Kelly and Prince Rainier visited on their honeymoon.

We’re equally impressed to learn that 19th century Polish composer Frédéric Chopin spent his winters on the island of Majorca.

Now, as Michael Douglas and partner Catherine Zeta-Jones spend their time between homes in New York and Bermuda, they’ve come to the decision that it’s time to sell up.

Michael Douglas has a history of interest in real estate, having made his first investment when he worked on his first film in 1966. He bought 70 acres of land in Vermont, which he still owns today.

And S’Estaca itself has a fascinating history, as it’s located within 200 acres of private land, spanning from the mountains to the sea. It was originally purchased by Archduke Ludwig Salvator of Habsburg in 1867. The Archduke used it to hide his paramours away from prying eyes, transporting them to the island via his steam-yacht The Nixe. He also carved steps out of the rock of the island for his cousin Archduchess Mathilde, who was apparently his one great love, so that she could walk into the sea to swim. 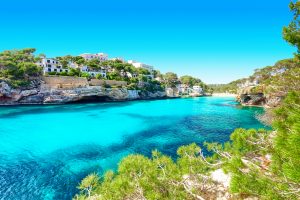 Over 100 years later, Michael Douglas came onto the Majorca mansion scene and upgraded the seven separate buildings and grounds, costing millions of pounds. It’s a total of 10,764-square-feet of living space, consisting of 10 bedrooms and 10 baths, which have been modernised. On top of that, there are large informal rooms, a library, gym, multimedia room and a master suite with a fireplace. Complete with a terrace looking over sea views, what more could you want for a break away from everyday life?

There’s also a swimming pool on the grounds, ancient olive trees, and a vineyard. For the oenophiles enjoying our article, the estate comes with a large wine cellar, which contains casks and bottle storage for wine that is produced on the property.

So, if you had a spare $33 million, would you treat yourself? We considered having a whip around in the office, but came to the conclusion that even if all of us pooled together our savings, we still probably wouldn’t have enough. Still, it’s good to have a dream!

This entry was posted in Overseas Property and tagged Celebrity homes, Holiday Home. Bookmark the permalink.