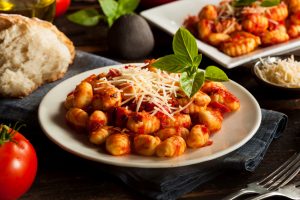 With Ryanair recently announcing a new route for 2017, all eyes are on Puglia. If you’re looking for a second home in southern Italy, take a look at these five foodie hotspots.

Craving privacy and access to some of the Mediterranean’s best food and beaches, celebrities have been heading to secret spots among the Puglian olive groves for some time now. But in recent years, the region has been attracting increasing numbers of holiday home hunters – many of whom can’t wait to try out its famous cuisines.

Elaine Ferguson, of PropertyGuides.com, explains why Puglia is so popular: “Tuscany and, to a lesser extent, Umbria will always be favourites with Brits. But the popularity of Puglia – once seen as the poorer, less sophisticated cousin of the northern regions – is on the rise.

“Known as the breadbasket of Italy, quality fresh food, from both the land and sea, is in abundance. Throw into the mix the region’s exciting and varied architecture and laid-back, rustic feel, and you can see why some people prefer it to northern Italy’s more polished feel. It’s encouraging that next summer, Ryanair is adding a new flight to Bari from Liverpool.”

If you’ve got an appetite for a holiday home in Puglia, here are five top foodie hotspots to kick off your search:

Right in the middle of the popular Golden Triangle area of Puglia, Cisternino is a meat-lovers’ paradise. It’s also home to the pretty Itria Valley and the highest concentration of charming trulli (conical stone houses). The ancient town is famous for its barbecuing butchers, or rosticcerias. Diners can select their own cuts of meat from a counter and request how it’s cooked there and then.

The neighbouring towns of Locorontondo and Martina Franca are also equally known for their meat – and they’re just as pretty too.

Wherever you are on Puglia’s coastline, you’ll find wonderful fresh seafood and fish, with each area specialising in something different. Around Bari and Polignano on the east coast, for example, they have a fondness for raw seafood, particularly sea urchins.

Gallipoli, in the southern part of Puglia, is probably the best all-round destination for seafood, thanks to its range of waterfront restaurants and renowned fish market. A must-try is the local red shrimps.

Puglia’s second largest city, after Bari, is Lecce, known for its incredible baroque architecture, central Piazza del Duomo, and pasta. Some of the region’s best pasta dishes, with vegetables or meat, can be found here. Especially good with tomato sauce is its orecchiette – Puglia’s signature pasta – and cavatelli. Restaurants in Lecce usually knead their pasta early in the morning so it’s ready to be eaten at lunch.

The city is also known for its ice cream – that’s if you have any space left after the pasta!

Back in the northern part of Puglia are two towns known for the two staples of most European cuisines – bread and cheese. Bread from Altamura, where wheat is grown locally, is so special that it has DOP (Protected Designation of Origin) status and is sold all over Italy.

Meanwhile, Andria is where the famous creamed mozzarella, Burrata di Andria, comes from. The area is also known for its intensely flavoured olive oils.

If your mouth’s watering, it may be time to head on out to Puglia to find your new holiday home amongst the fabulous foods it has to offer!

If you’re buying a second home in Italy, remember that we offer one of the widest covers as standard for your overseas property. For more information, visit our website: https://www.insuremyvilla.com/

This entry was posted in Overseas Property and tagged food, Italy, Puglia. Bookmark the permalink.