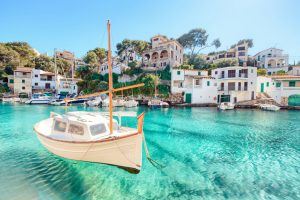 Mallorca is set to receive even more British visitors in 2018, as Thomas Cook and Jet2.com have announced new flight schedules from the UK.

This news arrives shortly after the latest figures show it was an excellent summer for Spain, with a record number of overseas visitors flocking to the Iberian nation. According to the National Statistics Institute (INE), Spain received almost 40m tourists during peak season, with experts fully expecting this number to rise next year.

The Balearic Islands are an especially popular destination for Britons, as the Mediterranean jewel can be reached for as little as £30 if booked in advance through low-cost airlines, such as easyJet.

And, due to Mallorca’s popularity, British travel firm Thomas Cook is launching a new Spanish airline based in the capital, Palma de Mallorca, from spring 2018. This new airline, Thomas Cook Airlines Balearics, will provide greater flight flexibility from the island for both holidaymakers and those with second homes.

“With more than one million Thomas Cook customers flying into Palma every year, we have a strong existing infrastructure on which to build,” says Christophe Debus, the Chief Airline Officer of the Thomas Cook Group.

Budget airline Jet2.com is also supporting the growing demand by adding 250,000 extra summer seats from its Birmingham base to the most popular destinations, including Alicante, Malaga and Mallorca. Last May, the popular low-cost airline unveiled more than 940,000 seats to Palma for next year already.

The news has been welcomed by leading Spanish housebuilder Taylor Wimpey España, which has been headquartered in Mallorca for almost 60 years. The team is delighted to hear that Brits will have an even greater selection of routes available to Spanish airports, including Palma, next year, as its latest trading statement revealed just how much Brits have contributed to the surge in international inquiries for property in 2017.

Marc Pritchard, the Sales and Marketing Director of Taylor Wimpey España, comments:  “Low-cost airlines have a great exposure to Spain and often offer attractive flight deals for Brits. Accessibility is a key factor for those considering buying a home abroad and, with an ever-growing number of flights from the UK, property owners can enjoy even easier access to their second homes on Mallorca.”

We are pleased to offer our specialist Overseas Property Insurance to those with homes in Mallorca and the other Balearic Islands. To get a quote and protect your place in the sun, click here.

This entry was posted in Travel and tagged Balearic Islands, mallorca, Spain. Bookmark the permalink.